Tomorrow is Megan’s birthday. Three days before Christmas. As much as we tried to make it all about her, I always felt a bit sorry for her that her birthday and Christmas blended into one big celebration. Still, being pregnant and giving birth in summer heat wasn’t all that much fun for me either.

The last few days I’ve been reminded of her presence by the butterflies. It was actually my sister who remarked, when I told her they were all flying around our yard, that it was probably Megan’s way of saying Hi.

I still find it difficult to talk about Megan’s death and yet, at the same time, I feel guilty when people ask, “How many children do you have?” and I say “Two” instead of three. I wonder whether that’s normal. It’s especially tricky when the doctor or gynaecologist asks. I usually answer them with a question – “Are you asking how many child births I’ve had?”

One of the first funny memories that sticks in my mind was when she was 3 or 4 and managed to stick a piece of crayon up her nose. The sheepish look of remorse when she was forced to ask for help was pretty priceless.

So too, her version of “Jesus loves me” – again when she was very young – went something like, “Jesus loves me this I know, and the table and the chair…”. Obviously more work was required on Sunday School songs…… and rhyming verse.

Not long after her brother Jeremy (aka Jamie because Jeremy was too hard for her to say) was born she sagely commented, “now we’ll have to say ‘Gentle Jesus Jamie mild’ – another reinforcement of our failure as parents in all things ‘Sunday School’.

Actually, I suspect that it might be a somewhat universal problem because my mother once told me about a little girl, who named her teddy Gladly after the hymn, ‘Gladly my cross I’d (read cross-eyed) bear’.

And when number two son asked one day, “If God’s not in heaven, where is he?” I was a bit perplexed until he followed that question with……. “Well, you know how we say, ‘Our Father who aren’t in heaven’?”

Perhaps a lesson for all parents (and teachers) in just how much the child understands of what they’re ‘learning’.

By far my strongest memory is Megan’s voice on the telephone, “I love you too Mummy” – although a teenager, she thought it quite funny to continue to call me Mummy.

For me it’s true what they say – the happy, funny memories are the strongest. I remember a bright young lady, who had just started a job she loved and was so excitedly hoping that it might lead to a career in journalism. I remember the night we walked home from the Mexican restaurant – quite drunk and loudly singing Elvis songs. I remember the hand-written cards with drawings and poems written especially for me.

I’ll leave you with a poem she wrote for me on Mothers’ Day…… literally a lifetime ago. 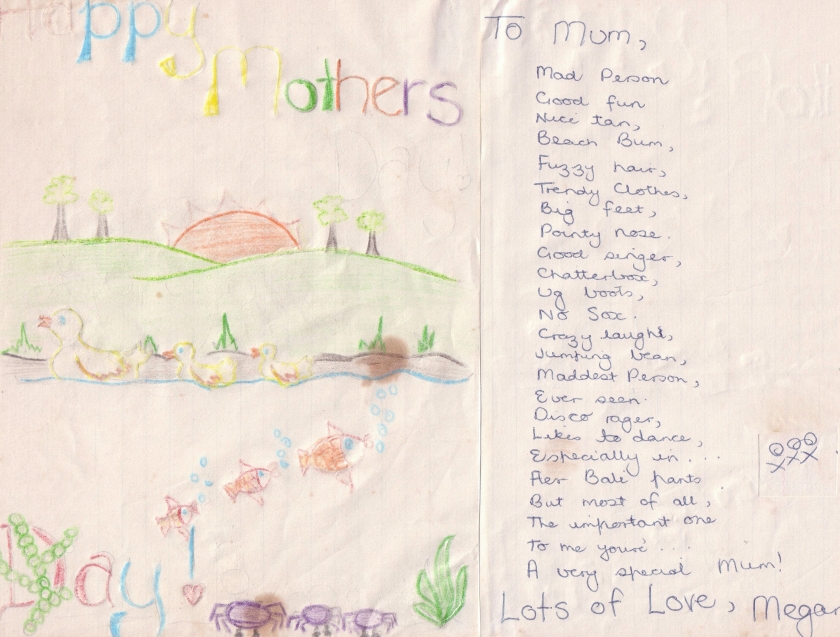