With Christmas just under 12 weeks away, it seems that we’ll soon be fare-welling all things 2019.

I remarked to someone the other day that it’s a pity no one travels out west in Summer because if they did, they’d see some fantastic displays in front yards of town houses (BTW quite a few farmers have their farm house as well as a house in town so I’m wondering, is that the origin of ‘town house’?) and outside station gates of Santa – driving a tractor, riding a motorbike, or checking out his ute engine, in preparation for the big day……….. or perhaps he’s just sitting by the side of the road contemplating how last Christmas seems like only a couple of months away. 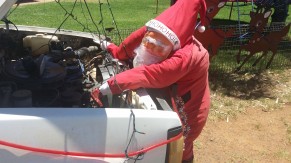 Is anyone else amazed – and slightly terrified- at the speed of time? Now Senior Constable Nige will tell you that speed equals distance over time (an essential calculation in Highway Patrol) but I’m here to say that I suspect that the speed of time is more related to how old you are and how busy life has become.

I have a theory that children see Christmas, Easter and birthdays as aeons and aeons away because their main focus in life is all about having fun and they literally can’t wait for them to arrive. On the other hand, as adults get older, they’re more inclined to relate to time in terms of bills due and doctor’s appointments and not at all in a hurry for either to arrive.

2019 has brought a mix of challenges – from a Cancer scare to dealing with big business. As scary as it is to be told you’ve got cancer, it was also a great relief to know that so many friends and family were praying for me. I have no idea how people with no faith handle that sort of trauma. And while it will be 5 years before I’m allowed to say that I’m cancer-free, I’m definitely not panicking.

On the other hand, dealing with big superannuation companies, energy companies and the like is enough to literally drive you mad and it strikes me as peculiar (but possibly not unique) that major traumas like health scares can be dealt with calmly but when I’m in a hurry and can’t find the car keys, it’s suddenly the end of the world.

Two recent dramas fall into the latter category. The first relates to discovering that my superannuation pay from the federal elections had somehow been lost in cyberspace, where no one seemed to know exactly is was going on. After numerous phone calls to the electoral commission and my superannuation company, I discovered that my paltry $153 was being rejected because the electoral commission’s clearing house wasn’t adding the word “NEW” to the word “account”. Of course, the superannuation company was aware of the mistake but apparently it wasn’t their job to inform the clearing house nor to fix it. That was apparently my job – even though I was told that I wasn’t actually allowed to speak to anyone in the clearing house. So the super funds were sent and then rejected and then sent again and rejected again and on it went. Considering the election was in May but without wanting to bore you senseless, let me just say that I feel so sorry for retired, casual workers who are trying to access their super. Hopefully, the Commission will recommend that small super amounts don’t need a new account opened and can be paid as cash to retired employees.

Drama number 2 was almost a re-run of an exact same situation with our telco a few years ago but this time it was our energy provider that got it wrong. The plan seemed simple enough – swap our Police rental energy account to the same provider that we use for our holiday house. After quite a lengthy online Chat, the deal was done and the necessary new account would be created…… until, within hours, I’d received an email stating that they were glad to help us with THE MOVE from Paradise to Cobar.

Suddenly I remembered our telco trauma – not only did they cut off our account in Paradise (mistakenly thinking we were moving) but they wanted us to pay the re-connection fee!

Of course our money and energy problems pale into insignificance when compared to the recent mining lay-offs and continued drought that Cobar is experiencing. Yet if you walk down any street or shopping aisle, you’ll be greeted with a smile and a G’day.

So let me just get in early and, in the true spirit of Cobar, wish everyone a wonderful, relaxing Christmas and a healthy and happy 2020….. only 3 months early!