I know I know…….. am I taking poetic licence too far? Still, if you’re wondering why it’s been “all quiet on the western front” (yes, I did it again), it’s because we’ve been otherwise engaged. Here’s the short-ish version.

In April this year, we paid $14,500 for a bright, shiny 2013 Nissan X-Trail T31. It wasn’t brand new but it was the newest car we’d ever owned and we had specifically bought it to go bush for the Cobar tenure. The owner was a friend and colleague; it had been regularly serviced by Nissan dealerships; it looked immaculate; it had only done 130,000 kilometres and it was first registered in June 2014 so it had been on the road for just over 4 years. What could go wrong? When the automatic transmission broke down 4 months later, we discovered that quite a lot could go wrong.

Enter the NRMA, who, despite their advertising to the contrary, declared that they wouldn’t be re-imbursing the $990 towing (to Dubbo) because, if I’d bothered to read the Terms and Conditions, I’d realise that I should have broken down at least 100 kilometres from home, if I wanted the undriveable car to be towed to a repairer. Caveat emptor!!

So here we were with our bright, shiny car which suddenly wouldn’t go. The high-pitched bearing noise was pretty much in line with what turned out to be a known manufacturing fault. According to Carsguide: “There were some issues with the CVT in early T31 X-Trails due to a bearing that was overloaded and prone to failure, and Nissan replaced many transmissions.” https://www.carsguide.com.au/car-reviews/nissan-x-trail-60072

So we paid the towing fee and the car was driven to a transmission repairer, who promptly rang to declare that the CVTs in these cars were garbage and he wouldn’t be fixing it because, at $4,000 the secondhand replacement part could only be guaranteed for 3 months (might have been good to know that before we sent it off). Feeling sorry for us, he kindly offered to tow it to the Dubbo Nissan dealer where it has stayed pending a dispute over who is responsible for the repairs.

Now a transmission is a fairly major component in a car and I had hopes that, under Australian Consumer Law  Nissan might be obligated to repair the car for free. After all, surely it’s reasonable to expect a car that’s been regularly serviced by the dealership, to last longer than 4 years and 2 months?

Unfortunately Nissan disagreed and despite the intervention of Fair Trading, decided that the most they were prepared to offer was just over half the cost of the repairs, leaving us to pay the $3,500 balance. It seems they have us over the proverbial.

The outback is not somewhere you can easily walk around. You really do need a car and so, while the dispute dragged on, we decided to bite the bullet and buy a second car.

As Nigel put it, it was my turn to buy the next ‘lemon’ so when I found a Challenger (we both agreed it had to be another Challenger) on the mid north coast it took a fair bit of organising to arrange the trip. 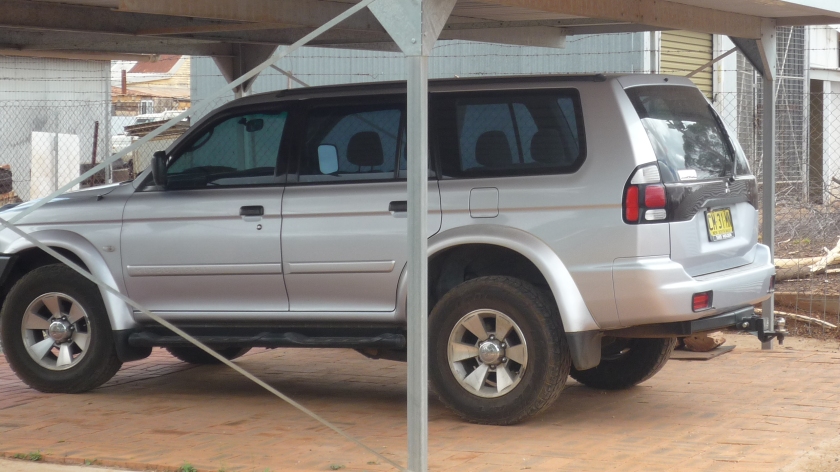 The 3 ½ hour coach trip to Dubbo station (past Dubbo airport) cost $26 – according to the driver, there’s no stopping under any conditions………. Hmmmmm what about being pulled over by a highway patrolman for a breath test???

So next came the 10 minute taxi trip from the station back to Dubbo airport ($25), followed by a plane to Sydney (don’t ask) and then a plane to Taree (ditto) where Anne was kind enough to pick me up at 9pm.

Another consideration – well, actually the main one – was that Nigel had to be on rest days to be home for Bowie/ devil dog, who tends to fret and punish us by destroying the yard if left alone for long periods.

So Plan A was hatched – 2,000 odd kilometres in 2 days and I’d be back home with Mr Bishi. The plan was working well until, at Dubbo airport, I received a phone call from the seller. Knowing that the car was due to be picked up, he’d organised one last trip to the mechanic to do a final tweak on ball joints and the like. When the mechanics changed the ball joints, it somehow altered the steering and he wanted to warn me that it didn’t feel right when he’d driven it to Anne and Steve’s.

When I went to drive the car home the next morning it became clear that the steering was pretty indirect and Plan B was born – find a mechanic, who’d drop everything and fix the steering then try to get home that day before the ‘roos’ came out.

Obviously Plan B was never going to work. The car needed a replacement Pitman Arm (I don’t know either) as well as a universal joint and shaft assembly (at least I’ve heard of them) to be found, then couriered then fitted etc.

So Plan C was enacted – stay another night with Anne and Steve, ask the NRMA for a hire car (Yes, I was more than 100 kms from home thankyou!!!) drive home and then come back down when the car was fixed and Nigel was ‘off’ again.

Is anyone still awake?

A week later and the car repairs had been completed (the seller insisted on paying the bill), the hire car had been returned to Taree and Mr Bishi and I had arrived safely in Cobar.

Brickbats to the NRMA, who decided not to put the “100 kms from home” proviso anywhere in their advertising plus Nissan who think that it’s perfectly reasonable for their cars to only last 4 years and bouquets to the lovely seller, who went out of his way to make sure that we were happy with the car!

And bouquets to Bowie’s new best friend (and police officer) Gresh, who stopped in to throw the ball so that we and the yard escaped punishment. Plus a big thank you to so many other friends and family for organising to get the car to Anne and Steve’s, driving me around, helping me to get an armchair upstairs (don’t ask) and letting me stay overnight (3 times!).

On a totally different note.. and in keeping with ‘if it can go wrong it will’, has anyone else ever mistakenly tried to boil sparkling water instead of still water in a kettle? 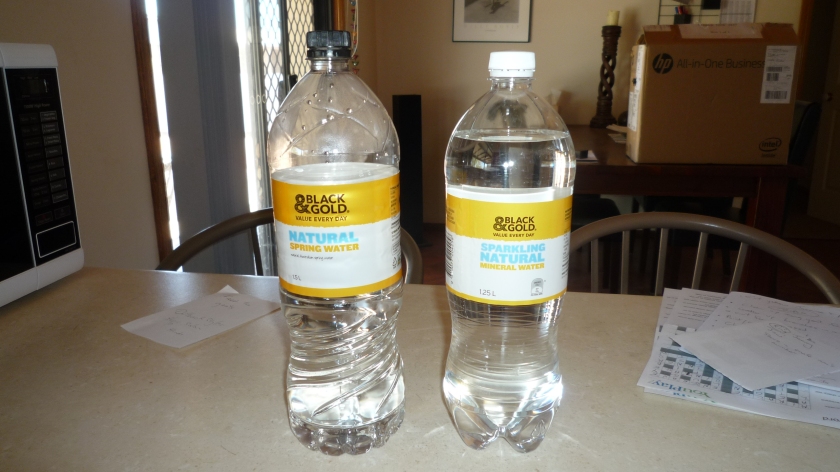 Obviously my brain isn’t handling the stress quite as well as it should!

One thought on “A Tale of two C(alam)ities”