October seems to have been a month of ‘firsts’. ……….. our first holiday back home since we’ve been here, first temperatures in the 40s, first lizard in the yard, first king brown snake in the town (that we know of), first mouse ….. make that mice, Kaye’s first days of teaching at the Central School and last but not least, our first bout of heavy rain.

While snakes, lizards and mice aren’t quite cause for celebration the holiday and the rain were definitely worth the wait! As for the teaching, the jury’s still out on that front. My being the closest casual teacher for more than 200 kilometres in any direction means that the school really can’t be choosey but then, of course, neither can I. So rather than holding out for Maths, French or German classes, I’ve so far taught (and I use the word loosely) Year 7 History, Years 7, 8 and 9 English, Years 8 and 9 History (composite classes are a must when there are only 35 students in the whole school), K to 2 Science, Art and Sport. My only saving grace was a Year 7 Maths class for one lesson, where I actually knew my subject content! 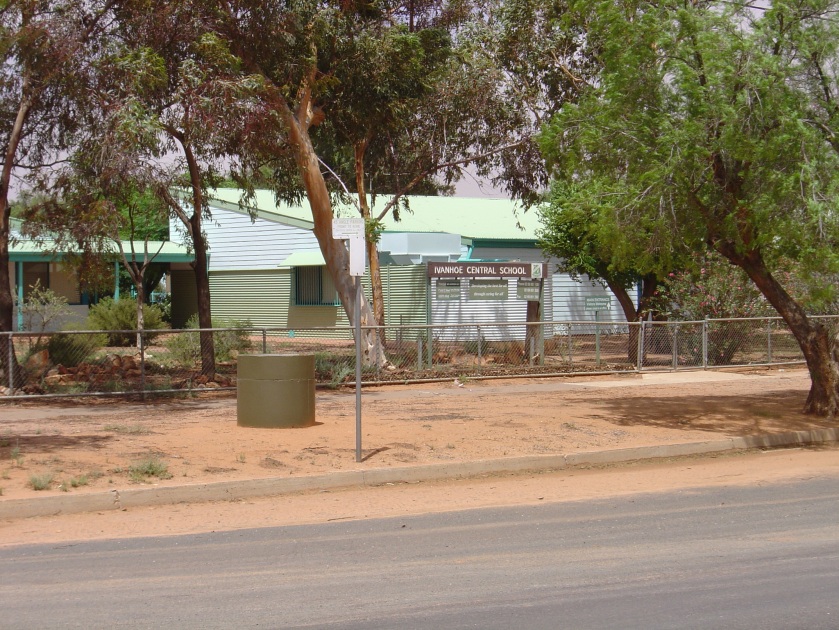 The small number of students in most classes (between 2 and 5) should mean that we get lots of work done. But on the occasions when half the class doesn’t feel like working, it’s quite common for the other student to become restless (euphemism) too. It was actually the Principal who first pointed this out, so at least I’m not alone.

Speaking of the staff, the Principal has been very supportive, the teachers and ancillary staff are welcoming and the students are well-behaved and when you can almost surround the class single-handedly, there’s really not much to complain about.

Having never taught students so young I find it all a bit daunting. But then, as quickly as the tears start, they stop and all is forgotten (unlike Year 12).

Then of course there’s the obligatory ‘dobbing’ ………. “Miss, Cameron said ‘knickers’!”………… and the just plain funny remarks like (in answer to ‘what type of dog do you have?’) – “She’s a bitch.” I find myself laughing or pulling my hair out!

Our holiday back on the coast gave us a chance to catch up with our  friends for some great food, drink and company.

All up, we traveled from Ivanhoe to our home in Paradise Beach (12 hours) in one stretch, then Paradise Beach to the Central Coast to stay overnight with Nigel’s mum and dad, and then on to Goulburn for a Breath Analysis course (instigated by the Police Minister after he discovered that no one in Ivanhoe was being breath-tested because neither Jackson nor Nigel had been trained to use the Breath Analysis machine!). Then after 4 days in Goulburn, we travelled back to Ivanhoe – total kilometres 3036, total fuel costs $650.

It was hard to come back to the blowflies and the dirt but our time in Paradise was a good reminder of why we’re living in Ivanhoe (if we had known about the snakes and the mouse plague, it might just not have happened!).

Another ‘surprise’ when we got home, was that the dirt had settled around the holes where our original septic tanks had been. This meant that where we had only just finished putting our concrete ‘path’ down, we now had rather large craters. In fact, the yard resembled a very old cemetery where all the head stones had collapsed into the ground. So the path sections were dug up, the holes were filled and the concrete slabs were re-laid ……… hopefully for the last time!

As for the lizard, given a choice between lizard and snake neighbours, I’ll take the lizards. It was a shingle back – one of those ones that look the same either end – and we named him Haka after he tried to scare us off by displaying his very large blue tongue. Apparently they keep the snakes away. Someone probably just said that to make us feel better but, even so, the Haka family are welcome any time.

Luckily, we never got to meet the snake, which turned up in the main street and apparently tried to cross the road. When several attempts to drive over it failed,  it met with an unfortunate (if not legal) end with a shovel.

The mice decided to house-sit while we were on holidays and have now turned into squatters. I did buy a couple of mouse traps but, being mainly wood, they’re not really washable and after trapping one squatter we had to throw the trap away. At more than $4 a trap, that will clearly become expensive. So we now have very fat, well-fed mice and it has become obvious that we need a better arsenal of weapons to deal with the new tenants.

Accordingly, I have just managed to procure the last “walk-in”plastic mouse trap  in town and we’re also waiting till Jackson gets back and hoping that he got my message about buying a dozen traps on his way home. In the mean time, I’m hoping that word hasn’t reached the brown snakes that there’s a family of mice (I’ve seen at least 3) living in the police residence.

The rain was a mixed blessing because not only do we have lovely green blades of grass appearing, but also our backyard has literally turned to mud. So we’ve had two dogs (we’re minding Jackson’s dog, Shags) with feet caked in mud, wreaking havoc in the sun room and occasionally the house. Shags is also a digger, which means that I am constantly replanting the garden.

After putting up with mud, flies, head stones and mice, the last straw was the month-old bones that Bear had buried and that Shags would find and then drag into the sun room to chew on. For the sake of sanity (mine) and survival (hers), Shags was returned to her own yard where Bear has access visits every second day.

After the holiday, we arrived home to an empty kitchen so this month we’ve also managed to fit in a 3 day shopping trip to Griffith so all up, October has proven to be quite a busy month. It really does all happen in Ivanhoe.