The idea of waking up each morning with nothing specific to do might be   appealing to some but it’s taken me pretty much a full month to come to terms with this lack of purpose and direction. While Nigel has been getting to know the locals and the local area, giving talks at the school and generally, doing what police do, I’ve been having a crisis of sorts, wondering what to do when you’re a casual high school teacher in a town with no high school students. Relax, I hear you say, read a book, go for a walk, watch TV…….. if you know me at all, you’ll know that’s easier said than done!With all the best intentions to ‘take it easy’, I decided that watching every episode of Grey’s Anatomy (I bought every season before we left) just wasn’t enough and that maybe the move to Enngonia was going to be a bit harder than first anticipated.

Of course there were other factors that triggered this panic attack  starting with the demise of our electrical appliances (Essential Energy has admitted that there’s a problem and is still investigating ….hohum). Originally, we figured that we’d recover our costs when Nigel received the $5,000 special remote location allowance.

I should point out that in the NSW Police, there’s a couple of “one-off” incentive allowances for officers prepared to go bush.  One is a choice between a new laptop and a desktop computer and the other is $5000 (albeit before tax). They’re one-off in that you don’t get them every year you’re in the bush …. Just once at the start of the tenure….. or so we thought.

After assurances that Nigel would receive the allowance and after our bright, shiny, new computer arrived (luckily just in time to replace the one that the power outages killed) someone in Admin pointed out that Nigel had actually already done a special remote stint in Ivanhoe and suddenly all bets were off. The $5000 was canned and, with the benefit of hindsight, we began to rue the electrical purchases that we’d happily put on the credit card. So, for various reasons, I started to panic about what we were doing in this outback town, miles from nowhere and whether we had made the right decision.

Now solutions come in many guises and this one came as an offer of 5 weeks’ casual work as acting (read ‘pretend’) Principal of Enngonia Public School while the real Principal recovered from surgery. Without any training in Primary Teaching, I was disinclined to take on the position and only agreed ‘if no one else could be found’. And so the apparent solution was born.

You’d think, with so few students that teaching would be relatively easy but give me high school students any day! If I’m not struggling with science experiments, I’m trying to learn alphabet songs so that I can sing along with the Kindy kids and even Maths is difficult when you’re trying to teach 4 different levels at the same time: “Miss I can’t do this”; Miss what do I do now?” and all the while, the phone keeps ringing and the SAM (Senior Admin -in fact, only Admin) is nowhere to be found.  If it weren’t for my 3 precious teachers’ aides, I would probably have thrown in the towel on Day One.

Of course, with no other casual teachers in sight, teachers do whatever it takes to find a replacement and so I probably should have been mildly suspicious when my job description was of a figurehead, who would simply ‘exist’ while the other staff would actually run the show. I would use the time to help the Year 6 student prepare for High School.

Unfortunately, no one told the other teachers that they’d be running the show so with no lesson notes and no idea what I was doing, it’s been somewhat of a steep learning curve. Worse still, when Friday afternoons come around, I’m the only teacher at school. Thank goodness for my one teachers’ aide, who works on Fridays with me!

Apart from the challenges, there’s been some good times too. I now know quite a few of the Indigenous locals – children and parents – as well as the other three teachers and the aides, who all work here part-time. Plus, I’ve participated in my first live video stream, which involved Primary schools around the state as well as taking a group of students to Brewarrina for a Rugby Gala Day (a lazy 400kms round trip).

Things that I have learned so far:

As I said, it hasn’t been all bad and, thankfully, after a fair bit of coaxing (read whingeing) the Principal, who is convalescing next door in the Principal’s residence, has taken pity and given me Mondays off – for which I shall ever be grateful.

Speaking of the Principal’s residence, I accepted an invitation to visit one afternoon and was confronted by three dogs and two ferrets – one of which proceeded to run up my pants leg and bite me rather painfully. Short of kicking or treading on them, I had no option but to retreat with apologies – silently vowing never to visit again!

In other news to hand, Nigel spent all last night with other RFS volunteers fighting a grass fire with a 35 km front that stretched from the Queensland border to just 5 kilometres north of town. Talk is that it was the worst fire since the 1950s and they’re expecting a strong wind change this afternoon so he and Jed (the other cop) have been warned that they’ll be needed again tonight. 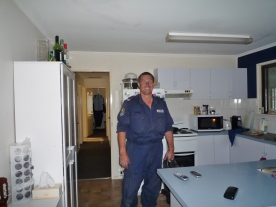 Bear and I, on the other hand, spent the night having a candle-lit dinner of salad wraps (Kaye) and tinned meat (Bear) in 40+ degree heat, after a car accident brought down a power pole and caused a smaller fire on the other side of town.

I’ll leave you with photos of a recent sunset – I’d forgotten how spectacular outback skies can be! 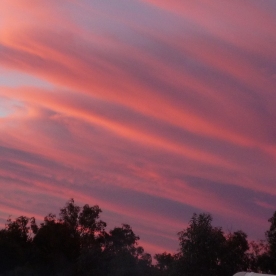 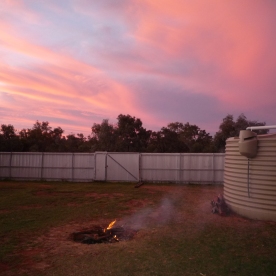 4 thoughts on “An unfamiliar crisis”