For those of you, who’ve never seen a river run, it’s pretty amazing stuff!

The Warrego River is the northernmost tributary of the Darling River, within the Murray-Darling Basin. The river rises from below Mount Ka Ka Mundi in the Carnarvon Range, near Tambo in Queensland, and flows generally south, reaching its confluence with the Darling River, downstream from Bourke. 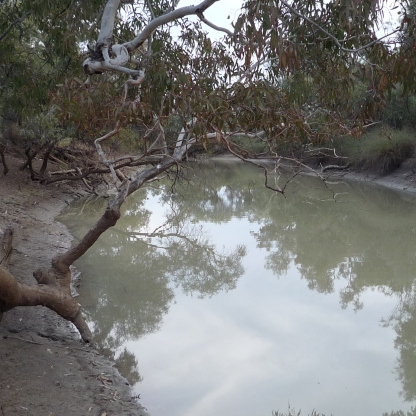 When we first arrived in 2012, the Warrego river was quite low but we were lucky to experience a few attempts at yabbying before it completely dried up a few months later.

Of course, we didn’t actually mind the river drying up because, according to the locals, and based on our residence’s proximity, the alternative was to put up with a multitude of frogs and snakes as the river spread under our fence and through our backyard and that wasn’t all that appealing either.

When the pub rang, on the 28th of December, to say that the river was coming down, we raced to the bridge just in time to see it flowing past. The photos were taken over a couple of weeks (we didn’t wait on the bridge) and by the 10th of January, the river bed had filled and then overflowed its banks. In one photo, you can see a couple of the local kids taking advantage of their new ‘pool’.

It’s hard to believe that Dee and I were actually driving along this road three weeks ago and there was a dry river bed!!