This is a quick, no actually long, no make that very long email continuing in the vein of “if it can go wrong, it will”. So for the sake of everyone’s sanity, a warning that you may want to stop reading now and go straight to the photos.

First let me update you by saying that we missed out on Bulahdelah but are about to ‘live the dream’, having arrived safely back home in Paradise.

We decided to drive “straight through” on Tuesday and arrived at 10pm on Tuesday night. However, our plans to sleep in the next morning went awry when the mower man turned up at 7 am.

That was just one of a long list of things that didn’t go according to plan.

By Saturday, the removalist hadn’t rung us (as per agreement) and remembering recent Bulahdelah-ish events, we were half wondering whether they had been cancelled. So Kaye rang the contact number given and ‘Garry’ said that our removalists had suffered a setback and had been caught in floods at Cloncurry on the previous job.

This meant that they were a “day behind” and wouldn’t make it by Monday morning and would Monday afternoon be alright? When Kaye showed a degree of sympathy, Garry decided to push for ‘would Tuesday morning be okay?’ and so it was agreed that two removalists would turn up bright and early on Tuesday morning.

When only one removalist (Brett) turned up early on Tuesday morning we asked the obvious question but Brett didn’t know exactly what had happened to the second removalist (Glen) and despite a couple of phone calls, all we could find out was that he was somewhere between Brisbane and Enngonia. So here we were stuck in a house with no food, no electricity, no phone, no TV, no furniture to speak of (because we’d sold it all to the locals in preparation for returning to a furnished house).

The only furniture we didn’t sell was an armchair, which was to go “straight to the pool room”, Kaye’s computer desk, a filing cabinet and our favourite king bed (which we’d never sell!).

By 11.30am there was still no sign of the second removalist and while Kaye was worried about not following the relocation guide rules (‘’at least one person present at all times”), Nigel was more concerned about making it home safely without falling asleep at the wheel. And so we left. But not before Nigel signed a blank inventory and condition report (bad move).

When the truck turned up on Friday (as agreed) we discovered that Brett had been replaced by a local (Steve) from another company. We also got to meet the elusive Glen, who introduced himself as ‘ex-army’ and then spent the morning folding blankets in the truck while 52 year old Steve (he told us) carried everything upstairs by himself.

While Steve was polite and amicable, Glen was actually quite belligerent, which surprised us until he told us that he’d broken our king bed (however, it wasn’t his fault because “the bedposts had just fallen off” while he was removing the bolts from the bed ends). While we were still in shock, he brought the bed upstairs and we saw that the biscuit joints on three of the 4 bedposts had actually snapped off.

Glen tried to re-assure us that everything would be fine once we re-attached the bed ends because that would “pull the posts” in. He was not happy when Kaye asked how the posts were supposed to just sit there without any screws or bolts. Kaye was even less happy with his answer – “with glue”.

When the bed didn’t just stand up by itself (surprisingly), the conversation deteriorated with Glen proclaiming, “I’m friggin’ trying to help you”. Enter Nigel, who took on the job of mediator (remembering that police are trained to negotiate whenever possible) saying that he could see Glen’s point. While that managed to calm Glen down, it pretty much had the opposite effect on Kaye, who was looking for a tad more support! Needless to say, the whole experience was rather unpleasant.

Now experience is usually a good teacher but in this instance, we had pretty much thrown all caution to the wind. Garry seemed reasonable and very nice, Brett was also very nice and actually grateful at the amount of items we had already packed for them. The company seemed fine.

Before we left, Kaye had stressed to Brett that the king bed would prove tricky to dismantle because the bolt heads were countersunk and they’d need a socket spanner as well as a screwdriver or chisel to lever against the timber and hold the head while undoing the nut and blah blah blah. Brett dismissed it as not a problem and we took off.

Remembering that Nigel had signed the inventory report before anyone had actually filled it in, the removalists, after breaking the bed, simply wrote that the bed was already broken. And there was Nigel’s signature to back them up.

So the whole sorry saga has been reported to Move Dynamics and in the mean-time, we’re sleeping on an airbed. Not quite the happy arrival we planned but we’re safe and we’re home!

To all our friends and family, who have patiently endured two and a half years of emogs and who have offered support and kind words when things went awry, we thank you and we’re now letting you off the hook!!!! 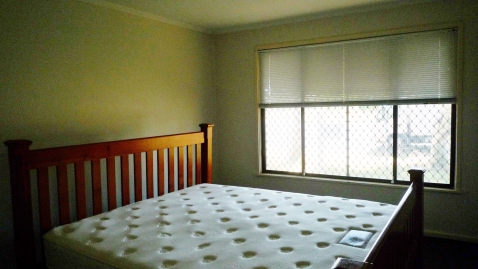 After submitting a claim for said broken bed, we were pleasantly surprised to be told by Move Dynamics that the repairs plus GST would be covered by their insurance.

The car insurance assessor wasn’t quite so helpful, reporting that the damage couldn’t possibly have been done at the same time (Remember emu vs Challenger?) until I emailed him the original photos complete with time and date and even showing the feathers still attached to the disputed damage. After seeing the photo proof, he quickly changed his mind and approved the claim. Thank goodness for mobile phones! Well, maybe I wouldn’t go that far, but in this instance they were pretty handy (which is funnily, the German word for mobile phone).